Farewell to the Warhorse

Posted on March 13, 2015 by harrythespiderblog

I bought my Specialized FSR XC Pro in May 2005. At that time after a house, a car and an engagement ring it was the most expensive thing that I had ever purchased.

In the intervening 10 years me and the FSR have had some great times. We’ve done races, scouted routes for organising Hit the North, pootled with the kids (that weren’t around when I first got the bike), had big days out and recently have been thrashing about in the dark every Monday night.

Together we’ve been through 3 forks, 2 saddles, 6 wheels, half a dozen bottom brackets, at least 4 rear mechs, 3 sets of back end bearings and numerous transmissions. In true “Trigger’s Broom” style there isn’t a lot of the original bike left.

We’ve ridden in the dark, at dawn, in sunlight and snow, solo and with masses for thousands of miles, with many close shaves and the occasional big crash. The frame is scratched, the bolt heads are rusty, the paint is dulled, the seat post is seized and there is a bend in one of the stays, but the old girl keeps on bouncing back. Well… it did until recently. It would appear that like an Alsatian of a similar age the back end has finally gone. After yet another trip to Cooksons for repairs I finally decided that the sensible course of action would be to cut my losses and get new bike.

They made me a very tempting offer on a spanky new Trek Fuel EX8 29er that had been loitering in the shop for a couple of months, but by the time I had sorted out the deposit somebody else had whipped in and bought it. Bugger. However, now the funds were in place I went off on a proper hunt and managed to get a Cannondale Trigger 4 29er for the best part of half price.

Where the FSR was long and low and matt black understated, the Trigger is big and wide and “Gulf” blue/orange shouty. The first ride was an absolute hoot, 6 Strava PBs and a dozen 2nds. And I wasn’t even trying to chuck it about as the front tyre looks a bit too “Californian” for muddy trails around Manchester.

So the FSR is in bits in a box ready to be cannibalised for spares to keep my Inbred and the wife’s Hardrock running for the next few years and me and Trigger are going to head off for a lot of mucking about.

I’ve changed bikes before, but the strange thing is that I’m actually sad to see the FSR go. The Trigger is better in every way, but at the moment it is just a bike. The FSR was a knackered, obsolete and a worn out money pit, but it was my bike.

The Cannondale has a tough act to follow, but we’ve got the next ten years or so to grow older together. 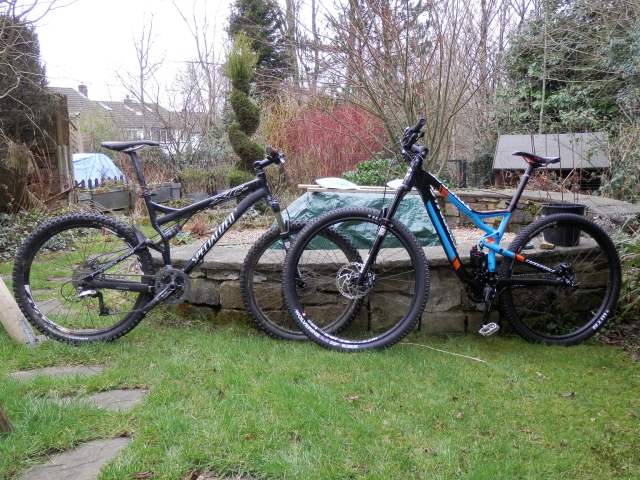 This entry was posted in Uncategorized. Bookmark the permalink.

3 Responses to Farewell to the Warhorse